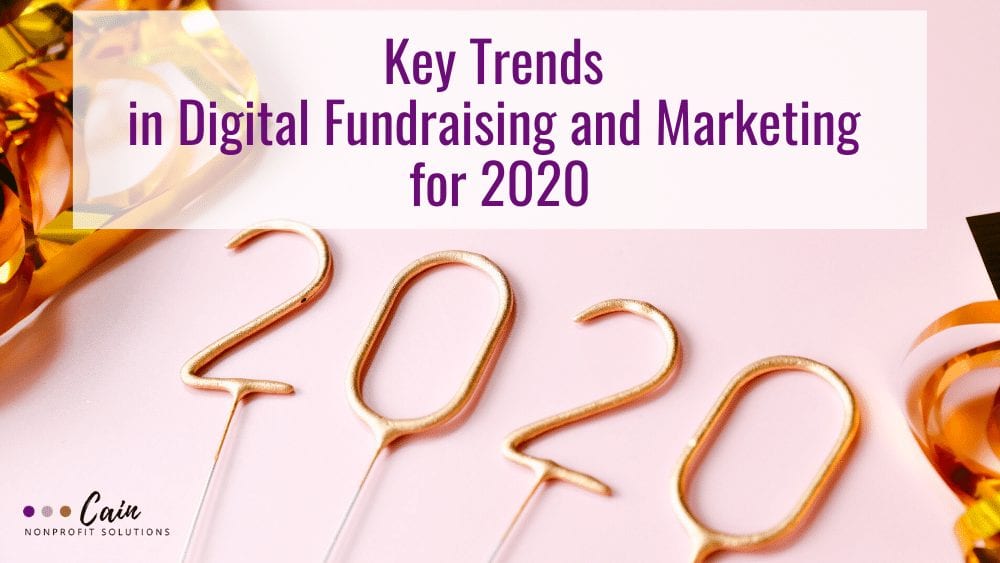 This year promises to bring big things in a variety of arenas – politics, science, and technology, just to name a few. But I also hope that it will usher in great successes and milestones for YOU personally and professionally as well as for the organization you work so hard for.

Of course, there’s no harm in stacking the deck a little in your favor, right? That’s what this blog post is all about. We’ll take a look at some of the up and coming trends (or trends from years past that are sticking around) that will help you and your nonprofit rise to new heights.

Devices using artificial intelligence have been around for a few years now. In fact, you may have an Amazon Echo or Google Home in your own house or office. Or maybe you’re constantly asking Siri to complete a task for you.

Either way, these devices and services will only become more prevalent and as they do, donors will look to them for convenient ways to donate. If your nonprofit has taken the initiative and set up easy voice donation capabilities, then you’ll be much more likely to receive donations than a nonprofit which hasn’t. Especially from coveted younger donors who expect easy tech solutions that aren’t a drain on their time.

Thankfully, setting this up doesn’t have to be hard. Here are some quick tutorials:

Set up a “skill” on Alexa

2. Put Diversity in the Spotlight

Diversity has been talked about for years in the nonprofit space, but as our country and our world faces increasing polarization, questions over borders and refugees, and struggles to accept the concept of the “other”, diversity is truly coming into the spotlight. The nonprofit sector has long been on the front lines of social justice and progressive ideas (at least for those orgs in the arts and culture sector, among others, anyway). This should, theoretically, mean that our organizations are already very diverse and inclusive.

Sadly, this is often not the case despite good intentions and otherwise great work in our communities. And it matters because as so many of these social issues come to the fore, funders and donors will be taking a hard look at the staff and boards of nonprofits to see if diverse voices, perspectives, and backgrounds are truly represented. You can bet that they will take this into account before making a gift or award.

Now, if your staff and board are not very diverse or very representative of the community you serve, that doesn’t mean you need to go out and fire half of them or ask half your board to resign. But it does mean that you need to create a true diversity plan for how you will recruit more women, people of color, members of the LGBTQ+ community, and others from varying backgrounds and foster a culture that welcomes them and incorporates their feedback into your work. This plan should include benchmarks, goals, and a timeline for implementation, which will go a long way towards showing funders, donors, and your community that your nonprofit is dedicated to this important issue and worthy of their support.

3. People will be putting their money where their passion is

This trend is sort of a continuation of trend #2, but on a bigger scale. Not to get too political, but no matter where you stand on the issues it would be hard to deny that the last 4 years have brought a lot of division and a lot of attention to how we all view right and wrong. This year is a presidential election year and that means that all of the angst from the last 4 years has built to a crescendo and people now, more than ever, want to vote their values.

But voting isn’t the only way we express our values, is it? In an election year, people will seek to give to causes which advance those values more than ever (often called “the election effect”). If you can show your patrons and your community that you support the issues they hold dear and are working to create the kind of world they want to live in, they will be more likely to give. Arts and culture orgs are uniquely positioned to do this, so do not discount the potential you have to touch hearts and minds.

That doesn’t mean your org has to get political. It just means it needs to stand for something and it needs to do more than talk a good game – it has to walk the walk, too. Show your community how you are changing things for the better. Show them the ways in which you look out for their interests and challenge inequities. They’ll respond.

If you’re skeptical of this I would encourage you to check out the data analysis of donor patterns during and following the 2016 presidential election from Classy.  They found that donations spiked around the time of the election and that those who donated near election-time were more likely to become recurring donors. This is because elections are good reminders of what we stand for and what kind of world we want – and people become more willing to put their money where their passion is.

Your job is to make sure you’re on their radar!

Donor Advised Funds (DAFs) are funds that people establish at foundations or through investment firms. With a DAF, they get the benefit of an immediate tax deduction and can make grants from their DAF over time. This has actually led to a lot of controversy over them. Donors love them for the tax benefits and the ability to make an impact over the long-term.

But nonprofits have been burned by them a bit. Whereas in the past many of their benefactors had private funds established at community foundations or banks which were easy to get in touch with and apply to for grants, many of those same benefactors have gone to DAFs instead. And orgs have found that DAFs are often not as responsive and may hold onto funds, not making any grant awards, for years at a time. What’s worse is that the process for actually getting an award from a DAF is often murky to nonprofits and there have been instances where even the wishes of the donor were not followed. This has led to the fear that DAFs are just a tax vehicle for wealthy donors but will ultimately lead to less giving to nonprofits.

No matter where you stand on DAFs, they aren’t going anywhere. In fact, they are increasing in popularity. The good news is that calls for transparency and regulation of DAFs are gaining traction! There are several court cases which should be heard in 2020 which could place regulations on DAFs and determine how they affect nonprofit recipients in the future. Keep a close eye on the news and legislation so your nonprofit can be agile in reacting to the changing funding landscape around DAFs.

If your nonprofit engages in social media marketing, then chances are good that you have a presence on Facebook. Facebook has long been the giant amongst social media platforms and because of that, most companies and nonprofits know that having a page and making regular posts there is a good bet for engaging your audience.

But in 2019, Facebook has come under increased scrutiny for privacy violations and concerns over how they use data and with whom they might share it. In recent days, there has also been growing concern that Russia will be meddling with the upcoming election via a campaign of disinformation and sowing discord among Americans, using Facebook as a primary platform.

With that in mind, many savvy tech consumers are spending less time on Facebook or moving away from it altogether. But these people are not abandoning social media – rather, they are migrating to other platforms. No matter your stance on Russia or Facebook, it’s still a good idea to look at how best to utilize social marketing for your nonprofit in 2020.

My recommendation is to maintain a presence on Facebook targeted towards older donors and patrons (think 55+) as they are less likely to leave the familiar platform. But I would also recommend branching out to other popular platforms such as Instagram, Twitter, or Youtube (if you haven’t already) and really targeting the content there to younger, progressive, and socially-conscious audiences.

6. Double Down on Personal Connection

Despite the rise of more devices, more tech, and more social media, studies show that people crave authentic connection more than ever. Donors and patrons are no exception, so I recommend really examining how you can give an extra personal touch to your marketing and fundraising strategies in 2020. And ironically, sometimes you can even use social media or other tech platforms to do it! Remember, it’s all about how you use technology.

Here are some possible ways you could personalize your interactions with your audience this year:

These are the trends I see coming down the pike in 2020 as well as my best insights and tips for using them to your nonprofit’s advantage. I hope they help you and set you up for the best year ever!

Now, take a moment to leave me a comment and tell me which trends you want to take advantage of, your thoughts on these trends, or what has worked best for you in past years.

I want to hear from YOU!

Goals, Objectives, and Outcomes: The Difference + How to Write Them for Successful Grant Proposals
February 11, 2021