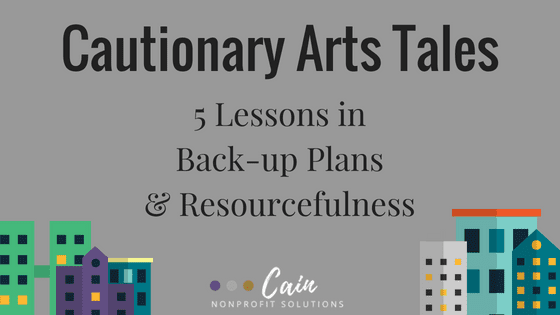 Today’s article is both a cautionary tale and a set of lessons.

All arts organizations go through growing pains and setbacks, especially in the early years when they are still small-medium sized. I’ve seen many of them fall into the same traps time and time again.  And I would like to use these common pitfalls as the basis for a little case study on backup plans, crises, and operational work in this article.

For the sake of creating an easy-to-follow story, let’s create a fictional arts org and call them ‘Random Symphony Orchestra’ or “RSO’ for short. RSO is going to be our guinea pig for highlighting some of these common traps I mentioned.

First, a little fictional background (based on a common, true scenario): RSO is a regional symphony in an area where they have access to multiple markets that enjoy the arts. Access to markets with other successful symphonies and arts organizations. They could have modeled themselves and their programs from some of these others who have made it work so well.

RSO has every reason and opportunity to be successful, also. And yet, they haven’t been.

Which begs the question, “Why haven’t they been successful?” That’s a multi-faceted answer that involves communication problems, a lack of attention to operational and foundational soundness, and a major case of Founders Syndrome. (If you haven’t heard of Founder’s Syndrome before, you can read more about it here.)

All of this has resulted in them canceling portions of their season due to lack of funds and crappy planning several times in the past few years. As a result, their ticket sales have dwindled further every year. They have lost donors and not replaced them. They have lost the faith and interest of their community. And what’s worse – they seem to have no idea why and have futzed around haphazardly trying tactics to turn it all around, with no real results.

This post gives you 5 strategies which, if followed, will make sure you never have to cancel anything near and dear to your organization’s mission. And if it all fails and you must cancel, you’ll know how to do it without risking your nonprofit’s reputation.

The Founder needs to put distance between themselves/their role in the org and all the various levers of power. Founders are rightfully very invested in their organizations, but sometimes that closeness and need for control can lead to shaky decision-making and hoarding of power. This is exactly what happened to RSO.

For example, your founder should not be the Executive Director and the Music Director and the Board President and have sole/final say over all financial decisions. That’s too much power concentrated in one set of hands and it’s asking for problems to arise. It’s fine for the Founder to want to be the board president OR the ED or any of the other positions I listed. But they should choose only one.

The key here is to institute checks and balances. And how do you do that? Move on to lesson #2 to find out.

You Need Policies, Procedures, By-Laws, & an Engaged Board. None of that sounds particularly fun, but I truly believe it's the most important work you can do if you want your nonprofit to be a success.

The RSO neglected this. The Founder was wrapped up in his vision of the org’s programs and his role in controlling all of it. Policies, procedures, & By-Laws were seen as a limitation to his control. The board had become little more than a group of friends who met to rubber-stamp their approval on anything the founder proposed. They didn’t understand their true role.

And so all of these foundational elements were neglected, giving the board and staff no guidance on how to handle decision-making, strategy, and crises.

And it also didn’t mobilize anyone to make strategic, long-term fundraising the priority it should have been, which leads to lesson #3….

If all your programming relies on a handful of elderly donors or a handful of grants you expect to get every year, then honey, you’re already in trouble. Similarly, if you don’t have a broad strategy for engaging new donors, retaining existing donors, and keeping fundraising campaigns fresh each year, then you are going to hit some roadblocks.

The RSO didn’t think that far down the road. They had a small group of very committed donors that had supported the symphony for years. Likewise, they had some grants that they had come to expect each season. But no one planned for what would happen when those donors passed away or the grantmakers changed their giving priorities. And those things eventually came to pass.

Then the founder’s health took an unexpected nosedive. He had always written the fundraising appeal letters and since there was no other full-time staff and the board wasn’t fully engaged, no one was equipped to step in and keep the machine humming along. And now there was also not enough money to hire someone to step in and take over his conducting duties temporarily so the season was partially canceled.

He had given himself too much power and too many responsibilities and the organization could no longer function at all without him.

What the RSO should have done was to have a diverse set of revenue streams that included multiple annual fundraising campaigns, events, planned giving, earned income, grants, and ideally an endowment fund. (You can read my post on Endowment Funds here if you haven’t already). In addition, they should have had by-laws and procedures in place to make the board a driving force in these efforts.

If these underpinnings had been in place, with a strategy to engage a whole range of grantors and donors, they would have weathered the founder’s health storm just fine with very few hiccups.

There’s a really overused saying that goes “A failure to plan is a plan to fail.” It’s overused because it’s just so good and it’s 100% right.

If the RSO had spent their time creating processes, procedures, checks and balances, by-laws, and strategies then they would have probably seen the need right away to have a plan for what to do when things go south. And even if they hadn’t written a plan in advance, they would have been able to do so really quickly if these foundational elements had existed to guide them.

So my challenge to you is to put these things in place if they aren’t already and then ask the question, “If our organization encountered a big problem what would we do first? Second? Third? Who would handle each thing that needs to happen? Who is the best voice for the organization? Who will make the decisions?”

Come up with a written Plan B for each program, project, and strategy that could potentially encounter a roadblock, reduced funds, etc.

Again, fail to plan and you will plan to fail. Have you ever heard of Murphy’s Law? Murphy’s Law states that whatever can go wrong, will go wrong. So you have to be ready for Murphy to move in and set up shop at your nonprofit.

In Lesson 4 I asked you to come up with a Plan B for what you would do if you started having problems. But what do you do once you’ve sped right past “problem” and hit a full-blown crisis?

The RSO’s founder brought many of his personal views into the orchestra. He was vocal about them in person at orchestra events and on social media…yikes! At times, this led to outcries and reputation issues for the symphony, which translated to lost ticket sales and donors. The RSO never responded to these issues at all and subsequently, never quite recovered from them.

Don’t be like the RSO. If someone on your staff accidentally puts their foot in their mouth on social media or something unintentionally offensive finds its way into a public speech or your season marketing materials you shouldn’t ignore it.

Instead, craft a crisis communication & marketing plan ahead of time. That way, if something ever happens, you can break out your crisis plan binder and you will already have a template to guide you through exactly what you should say and do next. This is your best chance at retaining donors, community engagement, funders, and the org’s good reputation.

I want to give you a metaphor you can think of if things ever start to fall apart.

In the fall, trees start to lose their leaves as the weather turns cold. We all know that trees do this, but do you know why? As the seasons change there is less light and nutrients for the tree to use to feed itself. If it wants to survive the winter, it must prioritize where to send the smaller amount of resources it’s receiving. So it allows all of its leaves to die and fall off and prioritize its resources to the trunk and if it has enough left over, to its limbs also.

As part of your crisis plan, think through the priorities of your nonprofit. If you had a funding crisis, what would be the first cut you made? What is absolutely essential to your mission and what is expendable?

In other words: what are the leaves and what is the trunk?

Prioritize now and you won’t have to try to do it in the middle of a situation when your head isn’t quite clear. It could save your job and the nonprofit you love.

To wrap up, the fictional RSO faced a lot of challenges over the years and didn’t always respond in a way that helped them move forward. But your nonprofit can do better by learning from their mistakes.

One last thing: drop a comment below and tell me if your org has a crisis plan in place! Also, if you are interested in a crisis plan template let me know in the comments. If enough people want one I will make one and post it on the blog!

Want more? Drop your name and email in the form below and hit ‘Get Updates' to get notified every time a new blog post comes out!

The Year is Over, But Your Donor Cultivation Isn’t
December 16, 2021