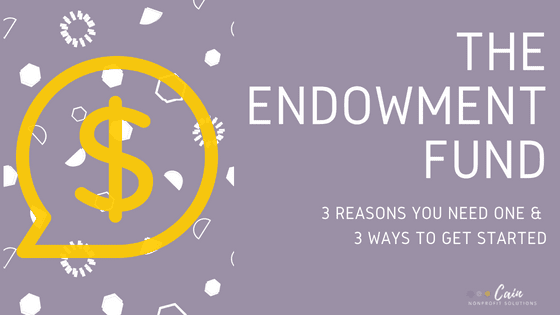 Before you run screaming or just nod off in boredom, let me assure you that this topic is so, so necessary to talk about and I will try my best to not make it dull as dirt.

An Endowment Fund is an investment fund designed to safeguard a nonprofit’s future against hard times and/or to allow annual income from the fund to help pay for the programs, operating needs, upgrades, etc. that the organization needs. Endowment Funds are usually managed by a separate sub-set of the board.

Please note that there are a few different ways endowment funds can be set up and utilized so your mileage may vary depending on a number of things.

With that out of the way, does your nonprofit have one? If not, why not?

If your answer was ‘Nope, definitely don’t have one” followed by a list of reasons why it’s not a priority, please allow me to take a moment to change your mind. I want to outline 3 key reasons worth making this a priority this or next fiscal year.

Having an endowment fund just screams “we have our $^%# together, we have a plan, and we are making things happen”. And that’s important if you want donors and funders to have faith in you and more importantly, add their money to the pot.

If you are able to say that you have a healthy or growing endowment fund I can promise you that it will increase your likelihood of bringing in additional funds and donations. All of which is vital to long-term sustainability.  All of which looks great on grant applications.

It’s a cycle of grant-readiness goodness and donor love. Promise.

We all know that operating funds can be the hardest thing to secure. Grantmakers and donors usually want to fund programs, scholarships, and other things that tug on the heartstrings. Operating is just not fun or exciting. It doesn’t come with pictures of a life you influenced.

But it’s probably the most important line item in the budget because, without it, none of the touchy-feely stuff happens at all.

Having said that, let me make one thing very clear: Endowment funds are usually restricted funds that can only be accessed in very specific situations. But they can also be set up to yield annual dividends that can be put towards operating.

This takes some of the strain off the annual race to find operating grants, unrestricted donations, and to increase revenue streams. You should probably do those things anyway, but at least with some investment income coming through the door, these things won’t be such emergencies and you can instead focus extra resources on new programming or expand existing, successful programs.

And having both a stable investment income stream as well as a track record of growing programs and implementing new projects makes your nonprofit look super smart, capable of strong management, and like a good prospect for more donations and funding. Again…..it’s a cycle.

Riddle me this: If your nonprofit had a true financial crisis, would it survive? What if all your grant funding suddenly evaporated for one reason or another? What if you found out an employee or board member had embezzled a ton of money? What if you had unexpected costs for your facility that had to be addressed immediately and those costs were significant enough to jeopardize your other operations?

This stuff happens to nonprofits every single day.

And for those without an Endowment or Reserve Fund, they can sound the death knell for the organization. But if you had a fund in place, you could breathe a little easier knowing that you may come out with some bumps and bruises, but your nonprofit will get to keep fighting the good fight.

If I’ve managed to convince you of the importance of the endowment fund, then please read on for 3 strategies to get one started:

Consider creating a campaign to help seed your endowment investment. You would offer this campaign alongside your annual campaign and/or other campaigns. You would craft an appeal letter and marketing materials just for this and you would prioritize fundraising for it for at least one fiscal year, and possibly two.

I want to illustrate this strategy with a story. In the early days of an organization I used to work for, the then-Executive Director recognized how important it would be to create an Endowment Fund to safeguard the organization’s future. For various reasons, the staff believed at that time that running an Endowment Campaign alongside all the other campaigns would not be successful.

So instead, the Executive Director and the Development Director created a list of the top 10 donors who they knew were very dedicated to the mission and programming. The strategy was simple: approach the top 2 donors on the list and ask each of them to make a matching donation to “seed” the endowment. The remaining 8 names were just back-ups.

Last but not least, let’s talk about your earned revenue streams. This might be ticket sales, class registrations, gallery sales, gift shop sales, or things along those lines. I want you to take a look at your budget and together with your board, decide on a percentage of those streams that could be temporarily re-routed to seed or beef up your endowment investment.

It doesn’t have to be forever and it doesn’t have to be huge amounts, but this is a good way to make sure you have something stable going into the pot. It also may mean beefing up your grants and donations strategy to compensate in the short-term if your budget is super tight. But that’s ok. You’ll be thankful later.

Although this post is nowhere near exhaustive on all the why’s and how’s of endowment funds, I hope that it will give you a great place to start.

I would encourage you to start a dialogue about this with your board of directors this month, contact whoever handles investments for your organization (if that’s no one at the moment, start by contacting the local community foundation for recommendations and advice), and plan your strategy.

For a deeper dive check out the following resources on nonprofit endowment funds:

Nonprofit Quarterly – Should Your Nonprofit Build an Endowment?

The Fundraising Authority – What Motivates Endowment Donors to Give?

Before we part ways, take a moment to comment below and tell us all if your nonprofit has an endowment fund. If yes, how has it aided the organization in its growth and stability? If no, why not? Do you have a plan to get there?

Want more? Drop your name and email in the form below and hit ‘Get Updates' to get notified every time a new blog post comes out!

The Year is Over, But Your Donor Cultivation Isn’t
December 16, 2021